Kurahaupo Iwi Near Agreement in Principle with Crown 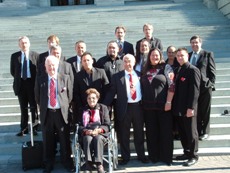 The Kurahaupo iwi of the northern South Island (Rangitane, Ngati Kuia and Ngati Apa) presented extensive historical evidence to the Waitangi Tribunal during a claims hearing process which commenced in August 2000 and concluded in March 2004. The claims mainly concerned Crown land purchasing in the 1850s, which rendered the tribes almost landless.

In order to assist the Kurahaupo iwi (and other northern South Island tribes) in more speedily negotiating claim settlements with the Crown, the Tribunal released a series of three ‘staged’ reports – in March 2007, August 2007, and June 2008. Virtually all of the Kurahaupo claims were upheld by the Tribunal.

This ‘staged’ release of reports, and the Tribunal’s comprehensive findings, greatly aided the negotiation process, and the Kurahaupo iwi are now approaching an Agreement in Principle (AIP) with the Crown. HistoryWorks Director David Armstrong, who was raised in Nelson and has a particular association with the region, presented extensive evidence to the Tribunal on behalf of Rangitane and Ngati Apa during the Tribunal hearing process, and more recently has acted as an advisor to the Kurahaupo iwi in their negotiations with the Crown. [Added 17 December 2008]

(Photo caption: Kurahaupo iwi representatives and their advisors, including David Armstrong, back row, left, gather at on the steps of Parliament on 24 April 2008, in preparation for their meeting with the Hon. Michael Cullen).