The Beating Heart – A New History of Te Arawa 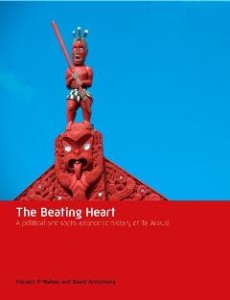 The Beating Heart: A Political and Socio-Economic History of Te Arawa, authored by HistoryWorks Directors David Armstrong and Dr Vincent O’Malley was recently released.  The  book, published by Huia, details the determined efforts of Te Arawa iwi to work with the Crown and settlers to pursue a mutually advantageous relationship under the Treaty of Waitangi while at the same time maintaining their autonomy, culture, and control over their land and resources.

While the ultimate outcomes were often calamitous for Te Arawa, the underlying theme of the book is highly positive. The tribes never ceased to struggled for a genuinely bicultural future. The book tells the story of the survival and resurgence of a dynamic people under circumstances that were often extreme and, as such, reflects the experiences of many other tribes in New Zealand today. The Beating Heart will be formally launched on a Te Arawa marae in February 2009. [Added 17 December 2008]