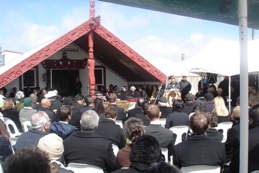 The Ngati Apa (North Island) iwi signed a deed of settlement with the Crown at Whangaehu Marae in October 2008.

The moving ceremony was attended by all of the HistoryWorks Directors. Bruce Stirling had provided invaluable evidence of Ngati Apa interests in the Whanganui block as part of overview evidence presented in the  regional inquiry in that district. Both David Armstrong and Dr Vincent O’Malley prepared reports on behalf of Ngati Apa and were involved in advising the iwi during the course of their negotiations.

The settlement package includes compensation valued at $16 million, along with various cultural redress measures and an apology for historic breaches of the Treaty of Waitangi. Crown actions rendered Ngati Apa virtually landless by the early twentieth century, and tribal leaders hope that the settlement package will allow the iwi to undertake a range of measures aimed at reestablishing a vigorous tribal identity in the Rangitikei-Manawatu district. [added 17 December 2008]