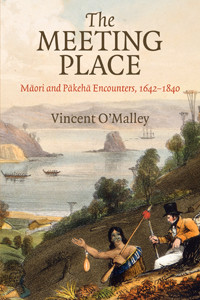 What can  we learn from the time before the Treaty? A great deal, according to Vincent O’Malley. His new book,The Meeting Place: Maori and Pakeha Encounters, 1642-1840, charts the story of early cultural contacts in Aotearoa/New Zealand. In the period before 1840, O’Malley argues, Maori and Pakeha gradually learned new ways of living alongside one another.

Mutual self-interest allowed an always volatile and sometimes violent encounter situation to open up more harmonious forms of accommodation, following initial incomprehension and misunderstanding. Both Maori and Pakeha came to recognise a need for one another – whether out of commercial, sexual or other motives – that provided the basis for unique forms of engagement.

In the two decades after 1840 the forces that gave rise to this ‘middle ground’ ebbed away. But resurgent Maori economic and demographic factors point the way to new forms of mutual accommodation in the decades ahead.

In recovering the lost  meeting places of pre-1840 Aotearoa, O’Malley therefore highlights not just a crucial era in New Zealand’s history, but also one with much to teach us as to the path ahead.

Listen to Paul Diamond’s verdict on the book, and Gavin McLean’s review. Listen to Vincent discussing the book with Graeme Hill on Radio Live. For more news, interviews and reviews of The Meeting Place visit our Facebook page here.

The Meeting Place is published by Auckland University Press.