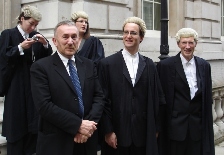 In early July 2006 HistoryWorks Director David Armstrong attended the Privy Council in London as a guest of the Ngati Apa Ki Te Waipounamu Trust. Mr Armstrong has provided research assistance to Ngati Apa since 1997, and presented extensive evidence for the iwi during their Waitangi Tribunal claims in 2003.

(Photo caption: David Armstrong (left), with Ngati Apa counsel Quentin Davies (centre) and R. D. Crosby outside the Privy Council (counsel were not required to wear wigs and gowns during the proceedings, but donned them later for photographs).

The Privy Council case involved an administrative law issue relating to a Maori Appellate Court decision in 1990. The Appellate Court determined that the northern boundary of the Ngai Tahu iwi on the West Coast of the South Island was at Kahurangi Point. Ngati Apa claim that the boundary is much further south – at the Paparoa Rangessouth of Westport (Kawatiri).

After the 1990 Appellate Court decision Ngati Apa embarked on a lengthy appeal process, which finally led them to the Privy Council last year. HistoryWorks understands that this may have been the last civil case to come before the Privy Council, making it an even more notable event.

The issue before the Law Lords was whether Ngati Apa had been represented at the 1990 Appellate Court. Ngati Apa insisted that they had not been represented, while Ngai Tahu argued to the contrary. The decision, released in October 2006, went against Ngati Apa. The iwi were greatly disappointed by this outcome, and now await the release of the Northern South Island Waitangi Tribunal Report (scheduled for late 2007), which may provide some support for their claims. The iwi remain adamant that the historical evidence supports their claims to customary interests south of Kahurangi.

The Privy Council sat in its Downing Street chambers – a few doors down from No. 10. Mr Armstrong notes that the atmosphere was remarkably informal, with a lack of wigs and gowns perhaps encouraged by 40 degree temperatures. Nevertheless, the extended and close questioning by Britain’s preeminent legal minds clearly provided a stern and perhaps intimidating test for all the counsel involved. [Added 11 February 2007]