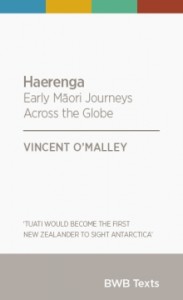 Vincent O’Malley’s most recent publication, Haerenga: Early Māori Journeys Across the Globe, explores the fascinating history of early Māori travel across the globe. Published as part of Bridget Williams Books popular Texts series, the work was released in May 2015.

‘Māori and Europeans were encountering one another for the first time not just along the shorelines of New Zealand but also on the streets of Melbourne, Liverpool and New York.’

From the late eighteenth century, Māori travellers spread out from New Zealand across the globe. They travelled for a variety of reasons – curiosity, adventure, commerce, political missions or under duress. Most travellers eventually returned home, bringing something of their own ‘new world’ stories with them. These remarkable experiences of voyaging and discovery, presented here in a series of vignettes, also form part of the wider history of Māori and Pākehā encounter.

Listen to Vincent discuss this amazing history of Māori travel with Kathryn Ryan on the Nine to Noon show here.