The Treaty of Waitangi Companion

Allowing the Many Voices of the Treaty to Be Heard 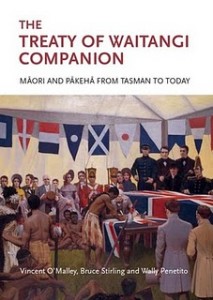 A new book on the Treaty of Waitangi sets out to allow the many voices of the Treaty to be heard. Launched this week at the Stout Research Centre, The Treaty of Waitangi Companion, edited by HistoryWorks directors Dr Vincent O’Malley and Bruce Stirling, along with Professor Wally Penetito of Victoria University of Wellington, tells the story of the Treaty, and wider Maori and Pakeha relations from the time of Tasman to today, in an altogether new way. Since the time of the signing of the Treaty in 1840 it has become a defining document in the history of Aotearoa/New Zealand. From the New Zealand Wars to the 1975 Land March, from Captain Cook to Hone Harawira, The Treaty of Waitangi Companion tells the story of the Treaty, and of Maori and Pakeha relations, through the many voices of those who made this country’s history.

Sourced from government publications and newspapers, letters and diaries, poems, paintings and cartoons, the Companion brings to life the long history of debates around the Treaty and life in Aotearoa. Was the Treaty a Maori Magna Carta or a fraud? A blueprint for partnership or an instrument of annexation and dispossession? In The Treaty of Waitangi Companion we hear from Maori and Pakeha wrestling with those issues, including King Tawhiao’s frustrated pleas to colonial politicians, Te Whiti’s messages of peace, and Sir William Martin’s appeals against the injustice of confiscation.

Kiwis often assume they know all they need to about the Treaty and its subsequent tortuous history. As Dr O’Malley told those gathered at the launch, ‘Treaty fatigue’ might almost be a medically diagnosed condition to judge by many of the comments that sometimes appear in the media and elsewhere. And yet, only a very small percentage of students at NCEA level choose the history option, and of those whose do, an even smaller number go on to study specifically New Zealand history. Meanwhile, since the establishment of the Waitangi Tribunal in 1975, the efforts of successive governments to inform the general public about the claims process and the history arising out of it have been negligible to non-existent.

Instead, it has been left to historians to pick up the slack, and the authors hope that their work will make at least a modest contribution to that cause.

Click here for a link to a recent Te Karere story on the new book. (Tip: use the interactive transcript feature to get the English text). And click here for a review of the book from theListener. [Added 13 November 2010]